Restaura Brasil is a campaign that mobilizes people and companies in a collective pro-restoration movement to restore the country’s native vegetation. The goal is to restore 1 billion trees on 400,000 hectares by 2030. Donating trees makes it possible to increase the scale of forest restoration in Brazil and advance the work against climate change. Restaura Brasil is part of The Nature Conservancy’s global campaign Plant a Billion Trees.

Climate change is advancing at an alarming rate due to a long history of native forests’ degradation worldwide. Forest restoration is a fundamental activity to tackle climate change, directly influencing the production of environmental services, such as climate stabilization, water supply, and the maintenance of biodiversity.

In Brazil, there is a deficit of native vegetation of around 21 million hectares, almost the total area of the United Kingdom. Those millions of hectares are concentrated primarily on the edges of the Amazon region, throughout most the Atlantic Forest, and in the southern Cerrado. The Brazilian government’s goal for the Paris Climate Agreement is to restore 12 million hectares by 2030.

Let’s all contribute so that Brazil can reach the pace and scale needed to meet such an important goal for the country and the world.

From the forest to the tree

Understand how Restaura Brasil works, from your donation to the monitoring of the restored forest. 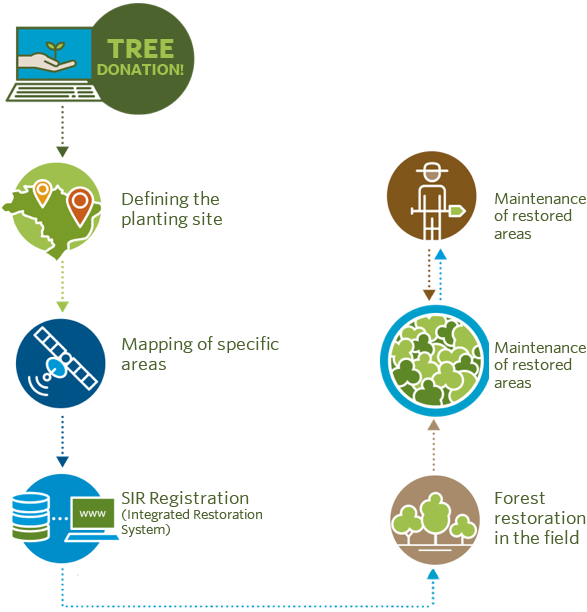 There are different restoration techniques, and each one is a solution to a specific challenge. Learn about the practices used by Restaura Brasil:

They are crops that promote the recovery of areas, intermingling forest species with agricultural species or those for commercial purposes.

Specific species are planted in the later stages of natural forest regeneration in areas with little forest diversity.

For areas undergoing natural regeneration but with large clearings, native-species seedlings are planted in specific locations.

In areas with little natural regeneration, seeds of native species and green manure are mixed and spread by hand or by agricultural machinery.

Planting seedlings of several species native to the region is appropriate for areas with low natural regeneration. The stages of the forest succession process should be followed.

For areas already recovering, the process is intensified with crown maintenance actions, fertilization, and ants and pest control.

Woody and grassy forest species are used to guarantee animal well-being and increase the vegetable protein available to them, in addition to generating local income.

The building of fences, setting up fire breaks, and creating marginal strips to stop degradation factors.

Techniques to improve soil quality, which may include green manure, embankment construction, and other forms of erosion containment.

Forests are capable of sequestering and storing atmospheric carbon through photosynthesis and tree growth. Carbon is absorbed and assimilated by the tree’s foliage and is stored mainly in woody tissues, such as trunks and roots, as well as in branches and foliage in the form of organic compounds rich in carbon, such as cellulose and hemicelluloses, lignin, starch, lipids, and waxes.

The restoration of forests in deforested areas is a natural and efficient way of absorbing part of the excess CO2 in the atmosphere, constituting an essential mechanism for significant compensation of greenhouse gas emissions.

CO2 sequestration is accounted for in the Restaura Brasil project using the Level 1 (Tier 1) approach proposed by IPCC1 (Intergovernmental Panel on Climate Change) in 2006. The estimates of total CO2 captured through the restoration activities consider the following factors: